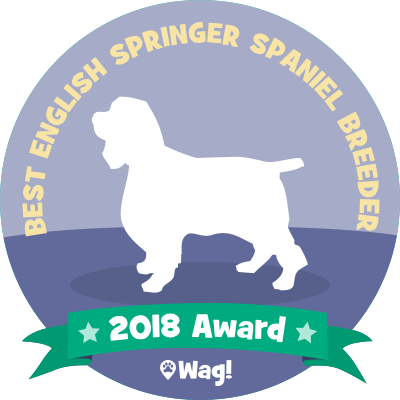 We are located in Spokane, Washington. We enjoy training for AKC Obedience and Rally with the Spokane Dog Training Club.

Coat: The English Springer Spaniel has a dense, smooth coat which is dirt- and water-resistant. English Springer Spaniels are white with either black or liver. They may have tan markings, usually on the cheeks or above the eyes. Show dogs generally have a longer, smoother coat with more color whereas working dogs have a shorter, rougher coat which is whiter for easier visibility.

Training: The English Springer Spaniel is not difficult to train. It is very intelligent and eager to please. Obedience training is recommended. The English Springer Spaniel can learn a wide variety of hunting skills, such as following hand signals, Scenting (tracking prey by smell), Flushing (flushing birds in a zigzag pattern), Quarter (remaining in gun range), Soft Mouth (holding a bird in the mouth without biting it), and Retrieve to Hand (delivering to the hunter on command).

Activity: The English Springer Spaniel is a hunting breed with high exercise requirements. It is happiest on the hunt, but also enjoys going for a walk, playing in a large field, retrieving, and swimming.

This is the founder of all the English hunting spaniels. During the Renaissance, it was considered the ideal companion for the European hunter. Its popularity in America began in 1700. The Springer Spaniel gets its name from his method of flushing game: he springs forward to drive birds out of hiding. This breed hunts well both on land and water and is good at work in brush. He also is a fine retriever. The English Springer Spaniel's merry, gentle personality makes him an ideal family dog. His talents are hunting, tracking, retrieving, watchdogging, agility, competitive obedience, and performing tricks.

Please click on the links to the right, let me introduce you to my goals, my dogs, and points of interest.

From time to time, I add new information, video, audio or pictures to my site. By joining my list, I'll be able to quickly send you email when I think there's something new you'd want to know about or when I post new puppy pictures.

Looking For An Older Springer?

If you are, please consider the English Springer Rescue America.  They help place Springer Spaniels that have been separated from their homes for any number of reasons.  Kathy Armstrong is our Regional Director for the ESRA and is a pleasure to work with.  Feel free to contact me with any questions you have or go directly to this website.   www.springerrescue.org

I ran across this training program several years ago when I wanted a good responsive dog without having to keep a treat bag strapped to my hip.  I have found none better for the price.

I reserve the right to refuse service or the purchase of a puppy or dog to anyone for any reason.